Professional (and ranked) CTFer and main administrator of all the Glider’s infrastructure, Cynic has probably the biggest overall IT expertise in the space. He spends most of days reconfiguring the servers or playing with some new dongles shipped from China. No one knows if he has a real job - or what’s his actual name.

Cynic is quite bitter when it comes to people, not believing in most of the educational effort other hackers undertake. The masses won’t learn anyway.

He finds some joy in exploiting that stupidity, writing elegant trolling tools and preparing pranks - or just spreading some civilian-grade chaos on the messaging boards. 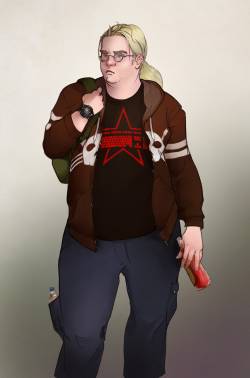 Cynic is an overweight 20-year-old with a cleanly shaved face and ash-blond hair gathered in a ponytail. It's worth noting that even though solidly chubby, he's not US-level morbidly obese and can move absolutely freely. He's a proper nerd and the biggest challenge in creating his image may be going beyond the cliches of “the computer guy” from dozens of shows.

He usually wears loose t-shirts with various prints - something along the lines of Newfags can't Triforce may be a good idea. He has a hoodie with either 18C3 or Hackaday - please modify the latter one slightly and give the skull perfectly round eyes so they don't sue us). In addition to that he wears long cargo pants, which pockets usually hold a lot of different multitools or whole bottles of mate. You may think about using ethernet cable as a belt - please keep in mind it's quite stiff and you won't be able to just knot it.

His face usually shows boredom or discontent at whatever is happening in the real world around him. He wears quite unobtrusive glasses which cover sunken eyes, an effect of many mate- and red-bull fueled nights.

If his wrists are visible, he'd be probably wearing some cool G-Shock, Pebble or even both.

Most of the time he focuses on multiple screens in front of him and ignore people around. His posture may reflect that - he can be shown either sitting or standing.

He gives an overall air of “I don't care” and his clothes may be in disarray, but he's got enough money for many gadgets - and a new wardrobe if he needs one.

Cynic is actually the main admin of most of the Space's infrastructure - and usually the reason everything is running smoothly, which he often brings up. Its status (and uptime) is almost sacred to him and he may go through a lot of inconveniences to prevent an outage.

With all his respect for technology and other administrators he doesn't really like people. He's given up on humanity long ago and he spends his spare time trolling completely unaware targets, often exploiting their technological ineptness.

His favorite trolls are self-sustaining, requiring only a single push to go down like dominoes. He's written confusing chatbots, metrocard-propagating wireless viruses and others. He usually chooses his targets with a sense of social responsibility, often defacing businesses cheating its clients or pyramid schemes.

Even though Cynic doesn't want to reveal his name and his past - just from a couple of chats with him you can easily say that he's been a “wonder child” most of his youth, constantly looking for a challenge and not finding anyone who he would consider a worthy rival. Spending a lot of time on creating plans and mechanisms without regard for any social aspect he quickly grew tired of people not being interested in implementing them and started detesting humanity as a whole.

Isn't it absolutely clear that we would be all better with a freedom of information? Who can honestly say that patents are more than a sick joke? Why would you hold peer-reviewed articles behind a paywall? Why not just teach everybody proper operating systems instead of this Windows shit?

Cynic is openly depressed by the society at large and chooses to escape it by ridiculing it through his trolling and a cynical stance to any change. He likes Hackerspace not because of the activism and hope around it, but because it's a meeting place for a lot of tech-savvy people he tends to respect.

He has very strict skill-based hierarchy when viewing communities around him and has serious problems to step away from it. He cannot stand Amanda openly dismissing the universal need to learn programming and just wanting to do her thing, as if her thing was worth mentioning at all.

With those he deems his peers (like Adam) Cynic quickly bonds over common experiences in solving computer problems. Even if he teases them regularly to learn new technologies or dust their older skills, there's a lot of friendliness going around. Or so he claims.