One of the original Glider founders and a well known figure in the local Maker movement, Robert is also a family man. He loves taking his kids - Kleo and Mike - to the Space and teaching them how to build a robot or to fix a bicycle.

While the least-present of the “core crew”, Robert is also the most responsible of them. This often leads to conflicts, when he trusts Adam or Cynic to get something done - and sees it being forgotten somewhere along the way.

He’s pretty adamant at keeping the Glider free of politics - it should be a shared workshop, a place to run classes from, not any kind of lobbyist institution. 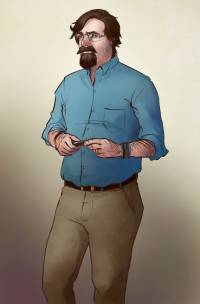 Robert is a powerfully-built man with broad shoulders and a well-trimmed beard. He has just turned 42 and it's showing on his body - with a round belly and a forehead creeping up. He's got an honest face, usually wearing a gentle expression, and glasses he wears only when reading something. Everything about Robert seems to indicate a well-established family man with a wife to help him make the right stylistic choices.

He usually comes to the Space straight from work, wearing a well-pressed shirt and jeans. He immediately rolls his sleeves up above his elbows to work in the common area (where he won't get dirty) or changes in a-little-too-small tshirt and sweatpants to work in the Heavy Workshop.

While not wearing any jewelry except of his wedding ring, Robert sports a dozen of cloth wristbands from a dozen of Hacker / Maker conferences sample0 sample1.

He might have a small and barely-visible scar on his face, neck or hand - he's been working with various equipment - soldering stations, engines and heavy machines for years. 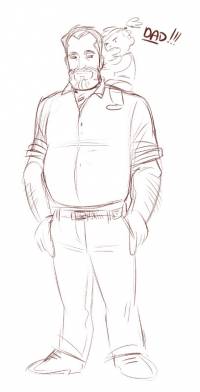 Robert is the most mature and responsible person in the Space. He usually doesn't take part in any of the petty dramas, but once he makes his mind about something - it's final.

With very little time he gets easily upset about others irresponsibility - he wants to come to the workshop to work, not clean somebody else's mess. It is important for him that the 'Space stays away from any kind of politics - it's a place to make and learn, not argue.

He is a family man, loving his wife and children. He often takes both his son and daughter to the Space, wanting to teach them not only specific skills, but also encouraging them to be curious and try things on their own. Robert knows he doesn't fully understand his children (possible sub-plot with Cleo loving Steven Universe), but wants to share with them as much as he can.

When asked, Robert will reluctantly admit that he doesn't really like his corporate job and he'd much rather focus on his own projects - and his family - full time. He knows this kind of thinking is unrealistic though - and needs to have a stable source of income to allow both of his kids good education and a proper start. This topic is usually a source of conflict with Adam, who wants to be a free spirit and doesn't agree with Robert.