Amanda is an anarchist working between the Glider and a local squat. She represents the creating and empowering aspect of anarchism, largely ignored by the popular culture.

She’s also an outspoken feminist - and while Suzanne can just ask to “leave her alone”, Amanda will be very vocal in criticizing every inequality.

She’s a sound operator to be found both at a movie set and preparing events. Her initial love for punk rock and metal has eventually led her to value many more types of music - and even try experimenting with creating something herself. Amanda keeps a collection of old USSR synthesizers in Space and can be often found playing them - and with them.

Getting close to her 30th birthday Amanda has some questions about her life to answer. She’s slowly getting tired of being a “bigger sister” for a lot of other anarchists, and still doesn’t see the change she had hoped for most of her life. Is this the time to change the approach? 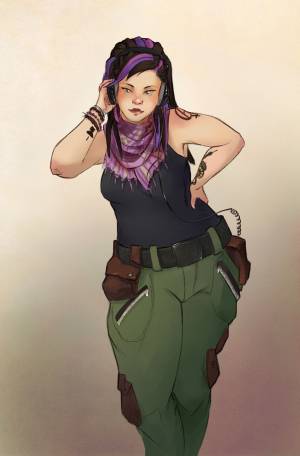 Amanda is the shortest of the main characters, slightly chubby woman nearing her 30th birthday. She's visibly pear-shaped with very prominent (but not comically wide) hips.

She feels good in her body and isn't afraid to show it, often wearing tank tops or tshirts showing her cleavage even in a male-dominated 'Space. She's very practical and has a hands-on approach, usually choosing outfits which will allow her to work freely, choosing trousers with real pockets (which she can modify herself) over skirts or dresses.

Amanda's face is very expressive, easily displaying a variety of emotions: relaxation and enjoyment while she's working on a new track; sternness bordering on anger when meeting with blatant sexism; concern over Suzanne who she treats as younger sister; pride in her own independence; exhaustion and despair when everything is just too much. She uses make-up more to underline her current mood than to make her face conform to the norm, and it can vary from very slight to Amanda-Palmer-like bold face painting.

Majority of Amanda's body is covered in tattoos from her angrier years. Even if today she embraces community building much more than smashing the state, she still likes them and proudly displays. She has her anarcha-feminist symbol on one arm, a snake wrapped over another, probably a small “volume down” somewhere.

She prefers a backpack or messenger back over any kind of purse, and sometimes can be seen with a fanny pack. She doesn't wear leather. Being a sound engineer, Amanda can be often seen with big closed headphones (with a curly cable) over her ears or resting at her neck.

Amanda's hairstyle is quite bold and allows easy access to her ears (for work), but these are the only requirements. You can give her dreadlocks or brightly-colored ponytail - whatever you feel suits her more.

When working as a boom operator (the person holding the microphone on a huge stick) she's usually loaded with all kinds of equipment in several bags all over herself.

As you can see, Amanda is a very visual character who likes her body and isn't afraid to use it to express herself - contrary to most other Space dwellers. Everything about her looks somehow emphasized who she is - and how she doesn't need to conform to anything. 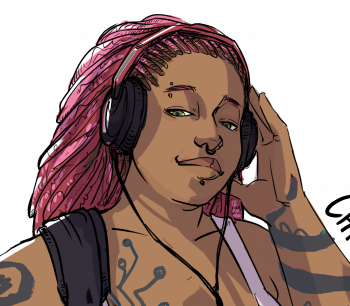 Amanda really enjoys sound - in a way few people actually do. She learned to enjoy different kinds of music, and likes playing with very experimental synth sounds, merging art with engineering. She doesn't have a stable job, but sometimes freelances setting up concert stages or mastering audio tracks when one of her friend's isn't able to. She's set up the sound system in the Space and actually instructs people how to use it without damaging their ears.

She's got a small collection of used audio equipment and old synthesizers she plays with, composing little tracks and putting them on the Internet either anonymously or under a pseudonym.

Even though really adept at signal processing and sound engineering, Amanda is the only person in the 'Space who doesn't know any programming language. That's enough for Cynic to consider her virtually illiterate - and which she regularly fights showing him her own skills, demanding to be treated as equal. 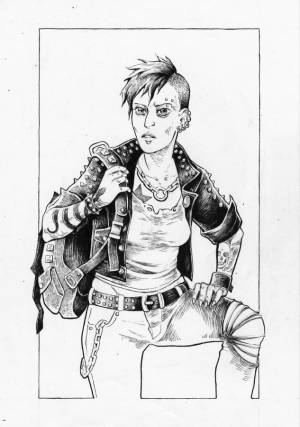 Long years in the anarchist community taught Amanda how to organize people - and made her feel responsible for communities she is a part of. Even though she treats 'Space mostly as her workshop, a place where she can unwind and play some synthesizers, something calls her to give a fuck even about this place.

Being a long-time feminist and co-organizing a dozen women's marches in different cities Amanda wants to fight inequality and patriarchy masquerading as elitism. She sees good people - like Suzanne - being turned off by Cynic's technical excellency requirements and a lot of unwritten rules even the founders didn't realize were there. She doesn't mind being ostracized for pointing them out loud if it only helps another person.

Used to fight for her place in various male-dominated communities - be it a movie set or a sound studio, Amanda has a tendency to quickly become “a bigger sister” for other girls, who may not be so determined. Not every one of them likes this, which sometimes leads to dramas - and Suz seems to be a little confused about Amanda's approach to her.

She sometimes conducts sustainability workshops - to show people how to fix simple things, live a little more ecologically and give a shit about community around them. Sometimes she's joined by Robert or Suzanne, less frequently by Adam.

Amanda knows a lot of people through the city, especially from the artistic scene - and really likes visiting the most fresh and crazy ones.

She's openly bisexual, but hasn't had any serious relationship recently. Some people gossip about her brief and intense affair with Adam, but none of them have confirmed it.