Each of the secondary characters is based and exemplifies one or more hacker archetypes. They won't play any major role within the story, but will be able to add a great deal of flavor and realism to the 'Space. 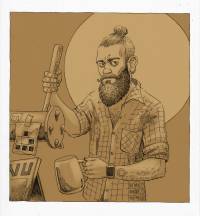 Felix tends to work in hipster cafes and craft bars, co-organizing nearly every tech event in the city. He really likes the Glider and supports it with a permanent discount for all the members. That’s usually enough for everybody to forget his unsavory obsession with apples.

While Cynic is perceived as a privacy freak, sh0dan is just a mystery. No one knows his (or her) identity, they’re just hanging around on the IRC with outlandish stories which sometimes turn out to be true. They were never seen in the Glider in person - or never admitted to their IRC persona.

From time to time sh0dan sends an anonymous gift to the Space - a long sought part required to complete somebody’s project, a gold-framed photo of Richard Stallman or a box of Mate.

Widely hated in some ‘Spaces, embraced in others, the Startup People believe in LEAN and SCRUM with all their hearts, knowing they can create the Facebook of tomorrow. Or Uber. Or Whatsapp. They just need A Vision.

Kasper has that - as well as quite a good business network. And a deep knowledge of Powerpoint (though he has been learning Reveal.js as well). For all the rest, there’s equity.

His adamant ignorance to all things scientific and technological has lead Kasper to transhumanism and belief in the singularity (which is near). Unable to really explain what that is, he simply states that Google and Facebook will bring a better tomorrow.

Most people at the Space deem him irritating, but Cynic and Suzanne outrightly hate his guts.

Using the space at strange hours between midnight and dawn Martha hides from everyone in a hoodie and huge headphones. She works on her own little pieces of art - small browser games or eerie dynamically generated adventures. She loves pixel art and seem to infect everyone around her with that aesthetic.

Originally convinced that Bitcoin is The Next Big Thing, Greg underwent a brief but intense therapy by Cynic and Adam. It was meant to cure him, or at least make him read the fucking whitepaper.

It only convinced Greg that Blockchain is The Next Big Thing.

He is now trying to write a toilet-paper-dispenser with it, but everyone’s supporting him as long as he learns something along the way.

Seemingly out of place, Juliet brings a whole new air of cosplay, furries and Undertale slashes to the Glider. Initially Robert wasn’t convinced that this type of activity is what he founded the Space for. It was only after seeing Juliet with a sewing machine - or learning how to put LEDs in fursuit’s eyes - that he accepted her as a full-fledged member.

Tall and so bony he looks like a wraith, Adrian is a mathematican, functional language lover and classical music composer. He is able to awe everybody with his skill to combine all three - and create music generators or neural networks composing for him.

These characters are vital for the plot, as the main characters interact with them somehow, but are just sketches which may change during the development.